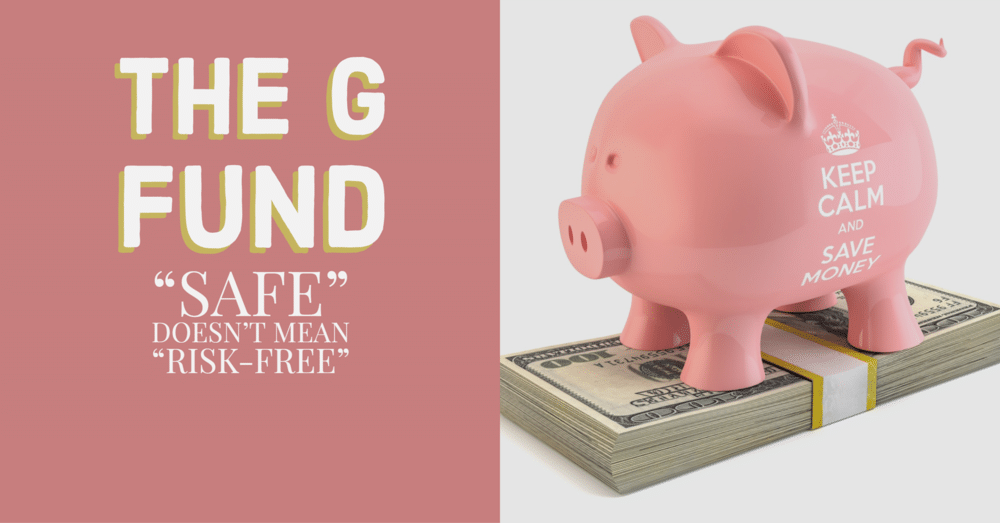 What Is The G Fund & How Does It Work?

The G Fund, has long been the low-stress haven of TSP participants looking to shelter their nest egg from market volatility thanks to its combination of safety and liquidity.  It is the most popular of the TSP funds, holding nearly 36% of all TSP assets because of its ‘safe returns’.  But in today’s interest rate environment, the G Fund’s ‘safety’ comes at a cost.  It is critical to understand that being ‘safe’ is not the same as being ‘risk-free’.  There are a number of different types of investment risk that need to be taken into consideration, a few of which we will expand on in this article.  But first…

What Is The G Fund & How Does It Work?

The G Fund is a special short-term US Treasury security only marketed to TSP participants.  It’s returns generally reflect the rate of the 10-yr US Treasury but does not require the participant to make a 10-yr commitment with their investment.  The G Fund also makes up the vast majority (nearly 75%) of the L Income fund, and acts as the low-volatility anchor that all of the Lifecycle funds rely on more and more as their target dates approach because of the relationship between Acceptable Risk and Investment Timeline.  From that standpoint, the L-Income fund actually helps provide some context as to the most common time horizon for monies invested in the G Fund.

When and how we intend to use an asset in retirement is a big consideration when determining how much risk is appropriate for that particular asset.  In the long run, history has shown us that accepting more risk by participating in the market generally equates to more long-term reward.  So why don’t retirees commonly have 100% of their money in the market?  Because one bad year can wipe out a lifetime of good decisions!  As Will Rogers put it, at a certain age we are more worried about a return OF our money than we are with a return ON our money.

If a particular asset were earmarked to pay your bills next month, that asset needs to emphasize safety and liquidity to ensure its available and accessible – regardless of whether the market is up, down, or sideways – on your next due date.  But if that asset was not intended to pay your bills for another 10 years, then more risk would be acceptable because there is ample time to recover should the market drop.  If earmarked for use in 20 years, even more risk can be tolerated by that asset because that asset would need to capture enough growth to outpace inflation for two whole decades.  Which leads us to our first concern about the G Fund…

I recently was teaching a FERS retirement class and asked the group to help define inflation.  One gentleman in the back, who had remained pretty quiet to this point, slammed his hand down on the desk and exclaimed, “Inflation’s the reason why a dime ain’t worth a nickel these days!”

Like water moving through the limestone of the Grand Canyon, inflation constantly erodes the spending power of our money by increasing the cost of goods and services.  It is working relentlessly against the returns we earn on our nest egg each year and increasing the likelihood that we eventually cannot continue to afford our lifestyle.  Inflation has averaged 1.9% since January 2009.  But the G Fund has only averaged 2.3% over that same time period.  So, if you had $100,000 that earned $2,300 in a year, we have to then consider that the purchasing power of that $100,000 went down by $1,900 during that same period.  This leaves us with only a $400 net gain – and, unless its in the Roth TSP, that gain is subject to income tax before it actually reaches our wallet for us to spend.  If we assumed 5% state & 22% federal income tax, that 2.3% average would have an after-tax equivalent yield of only 1.68% (not even keeping up with inflation).  Is this a problem for money intended to pay next month’s bills?  Of course not!  But, the longer we defer use of those monies parked in the G Fund, the more erosive the impact of inflation – especially for those trying to generate income in retirement.

When on our fixed income, coupling today’s suppressed interest rates and with the relentless march of inflating expenses often requires us to withdraw more principal (as opposed to earnings) in order to meet our budgetary needs.  This begins a dangerous cycle because it leaves less principal to earn towards next year’s income – which further perpetuates the need to rely on principal to pay the following years bills and so forth – accelerating the depletion of our account.  Thus, the great irony is that the longer we spend enjoying our golden years, the more ‘gold’ we must generate each year as inflation works against us ceaselessly!  That is why having a Thrift SPENDING Plan is so critical to your long term success!

Although popular, the G Fund rates of return have left much to be desired over the last decade and that’s before considering the Public Policy concerns.  Some politicians feel that the G Fund is ‘too sweet’ of a deal.  There have been multiple proposals, from both sides of the political aisle, looking to reduce the interest credited to participants of the G Fund as a means of balancing the budget (or at least a means of partially curbing our ballooning national debt).  The details differ with each rendition of the proposal but the question the politicians are asking boils down to “Why should we offer a 10-year treasury rate of return without a 10-year commitment?”

Under these proposals, the G Fund would actually decrease the returns to be more in-line with Money Market accounts and short-term CDs.  If the rates are further suppressed through these proposals and the G Fund remains the only option in the TSP that protects your principal, those on fixed incomes will face a tough decision – let inflation erode our spending power and force us to spend more principal each year OR take more market risk in hopes of chasing returns that can outpace inflation.  It is no wonder that many feds are looking beyond the limited options of the TSP when designing their retirement income plan.

Now another unique condition of the G Fund that you are forced to agree to in order to participate is that you must allow the government to borrow that money, at will, without asking your permission.  Now the repayment of those funds is backed by the claims paying ability of the US Government… but there are $22,000,000,000 worth of other claims that Uncle Sam has to worry about.  Has Uncle Sam ever defaulted?  Never.  But keep in mind it took 200 years, two world wars, and the building of America as we know it to rack up $7,000,000,000 in debt through 2007.  That has more than tripled in the last decade alone!  Thus, there is also the concern of the government using the G Fund to keep the lights on each time the Debt Ceiling comes around.  No one wants to be the last resort for someone who’s shown the fiscal irresponsibility that our government has.  When was the last time the Treasury Department had to take ‘extraordinary measures’ to keep the government lights on you ask?  Try right now…

For these reasons it is important to understand where the G Fund is ideally positioned in your retirement timeline.  The G Fund is great for short-term funds that need to be safe because they have a shorter investment time horizon before their intended use.  Monies in the G Fund with a timeline that is longer than a 5 or so years may face issue when trying to outpace inflation again and again with the paltry long-term growth of the G Fund.  So, for different people the G Fund will play different roles largely based on when and how the funds in question are meant to be utilized.  One way of simplifying it is to say the G Fund is the best money market account (or comparable short-term investment) available today.  In the TSP’s limited options for retirees, you must either sacrifice growth by using the G Fund or sacrifice safety by looking at the other 4 TSP funds.  So, for those of you not willing to settle, there are alternatives that provide similar safety with the potential for much better growth when we look outside of the TSP.

If you would like to review the G Fund’s utilization in your own retirement plan and compare it with some higher-earning alternatives, be sure to contact a Federally Focused Retirement Planner.